Controllers / Arduino Night is going to long term end up as an Internet Of Things (IoT) direction in the course.   The course is going to expand upon the basic Arduino type hardware controller into a more system approach to handle many devices and many interface of which one Arduino is not suited. 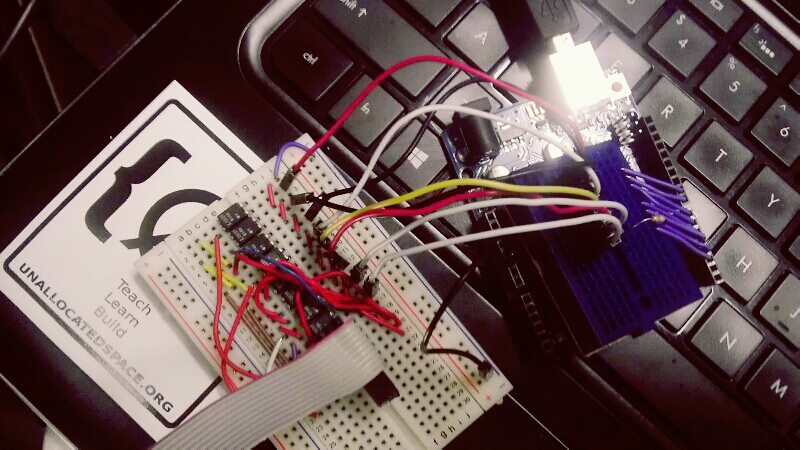 UPDATE 12/14/2016: Due to the holiday season and festivities that follow, we will be cancelling the remaining classes for the month of December and will be resuming them in January with a more advance list of topics. See you after the new year!
Demonstrate how both Arduino and Raspberry PI can control hardware and in addition explore how to make the Raspberry PI utilize the Arduino to control hardware.  The goal of course it to explore the full gammit of what the Raspberry PI used in conjunction with Arduino can do for IoT type development.  In addition, utilize screen scraping, twitter, and website / web services to control devices.

· Initial night will be to configure peoples Raspberry PI(s) and computers for programming both Arduino and Raspberry PI.

The goal for week 1) is that everyone would walk away with knowledge to build a bearing and orientation display (Cockpit) Read Out Display utilizing Raspberry PI and Arduino.

Would expect to utilize the following hardware over the course:

Different people are at different levels of experience and also have different goals.   The expected direction is to always have couple new hardware device controls each week and to have a couple new software tools each week.  If do not get a sensor kit the device programming each week would be limited to very few devices like LEDs, etc. which if couple people get the sensor kit we can do a lot more cools stuff.  Up to each person as I am sure you can pair up.    The sun founder kit has many pluses for what we want.  (It does cost money which some may not have but hopefully enough people can get a set of basic sensors.)

Initially, am expecting to follow the SunFounder Sensor Guide and the Oreilly Raspberry PI Cookbook for examples so that people needing to catch up can understand and research more details than in class.    The goal of course is really to push the IoT concepts more than the sensors.  The sensor knowledge is just research and experimentation but good devices meet with better IoT examples later.  Wanted to follow all the hardware around a book so people needing extra help have something to consult / learn from.  The course goal is more about putting all the device knowledge into one IoT controller set of Raspberry PIs. Book examples from:  http://shop.oreilly.com/product/0636920029595.do

Expect to have a variety of sensor examples but some may choose just to light up LEDs.    (Examples will be from various Sensors in the basic 37 sensor kit.)

At end of course I would expect people would understand how to build a master control console controlling a variety of hardware.  Control console would be physical and or web accessible via IoT methodologies.

The space is open in a limited capacity

More information and updates on our COVID-19 Reopening Guidance can be found on our wiki here.